The Surly Big Fat Dummy is a long tail cargo bike that took a few too many doses of growth hormones. At first glance, you might say that we just put bigger tires on a Big Dummy. But if you said that, you’d actually be very wrong so just…don’t. Think of Big Fat Dummy as more of a second or third cousin to Big Dummy rather than a brother. They share some of the same DNA and look sort of similar, but they’re two very different bikes and really only interact when they both reach for the potato salad spoon at that family reunion that no one really wants to be at anyway.

Now that that’s out of the way, let’s get down to the nitty gritty of what makes this hulking beast of a bike tick. Our goal with designing a cargo bike around fat tires was to create the most stable, stiff, and traction-laden ride possible while hauling a ton of stuff. Big Fat Dummy has a longer toptube and slacker headtube than its more svelt cousin giving it a nice, predictable, and stable ride. We also used thinner, lighter tubing to construct its cargo area so while it’s an overall burlier bike, there’s not much difference in weight.

The Surly Big Fat Dummy accepts either 10mm or 12mm axles in the rear with a spacing of 190/197mm. That big ‘ol spacing equates to one thing: tire clearance for days. Big Fat Dummy maxes out at a massive 26 x 5.25” tire.* While that large of a tire provides the most traction and stability a bike can possibly offer, it’s also a lot of rubber to push and might not be for everybody. Luckily, Big Fat Dummy is also a blast to ride with 3” tires too. It uses the same 100mm suspension-corrected fork as the Wednesday, meaning if you want to add a little squishy squishy to your ride, you can throw a Bluto on and let ‘er rip.

If you intend to carry a passenger on your Big Fat Dummy, Surly requires use of our Dummy Rail Collars. These provide a secondary retention system for the rack, as well as stiffen the rack system. In addition, a stoker handlebar set up, found on tandem bicycles, is recommended as well. Make sure to check with seat post manufacturer for stoker handlebar compatibility. All Big Fat Dummy framesets and bikes ship with a Dummy deck, rails, bags, and the aforementioned Dummy Rail Collars so you can immediately start hauling cargo — human or otherwise.

The Surly Big Fat Dummy is ready and willing to carry all sorts of sh*t — literally. It’s already in use on an organic farm in Ecuador so it’s likely that it’s hauled some form of manure by now.

*Using a 26 x 5.25” tire will cause some drivetrain limitations. For all the nuts and bolts of compatibility read Andy’s blog on the subject. 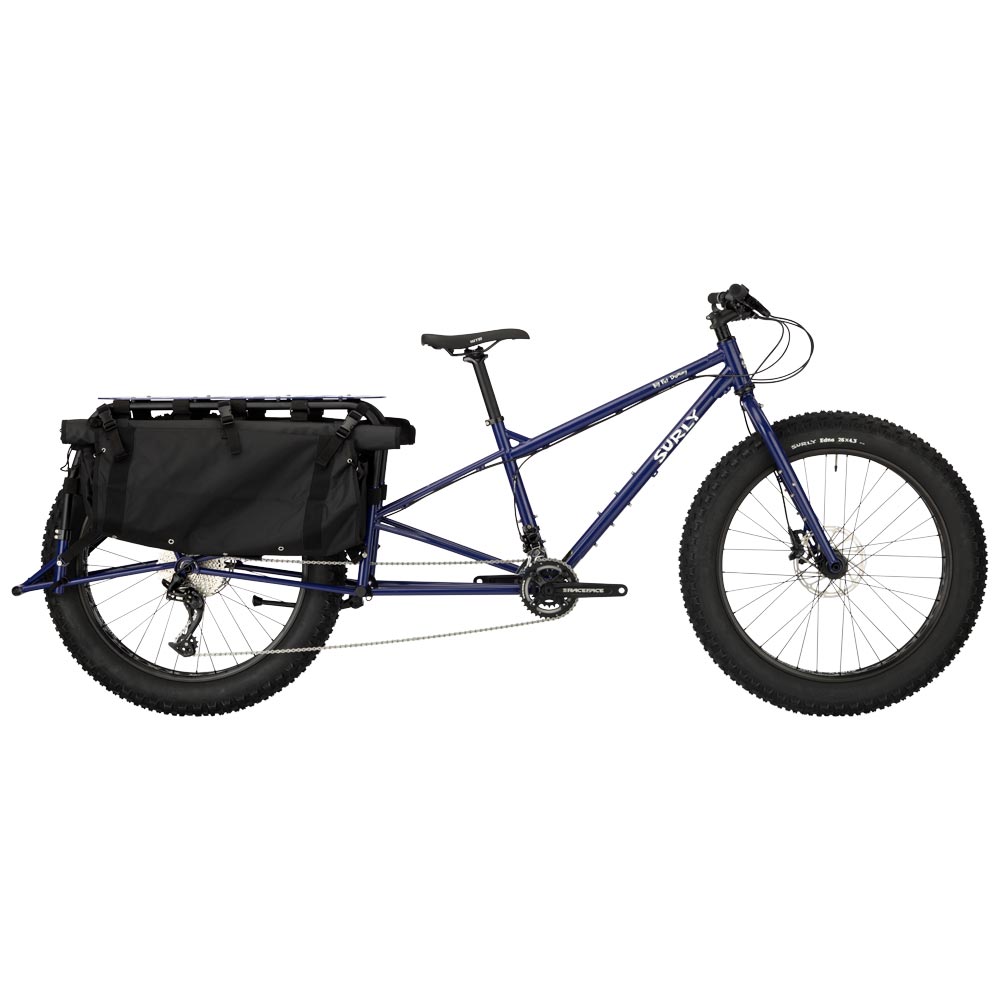 Hi, Please Note we will be Closed from Saturday 23rd to Wednesday 27th Oct for a Half Term mini Break. Thank you for your continued support. Dismiss